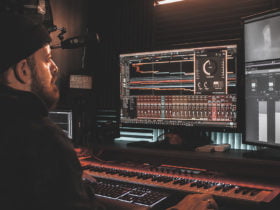 Here we are going to discuss the 10 Best Fastest Rap Song Ever you must listen to. But before that, you should know about rap or Rapping. So, Rapping or rap is a musical form of vocal performance incorporating rhyme, rhythmic speech, verbal expression in various ways. Rap is different from other kinds of music because the call difference is the delivery of the content faster in hip hop than in other kinds of music.

So, let’s look at the list of the 10 fastest rap songs ever:

One of the fastest rap ever by Mr Tung Twista. Carl Terrell Mitchell was born on November 27, 1973, in Chicago, Illinois, U.S, better known as Tung Twista. He is best known for his chopper-style rapping and for once holding the title of fastest English rapper in the world according to Guinness World Records in 1992, vocalising 598 syllables in 55 seconds.

Worldwide Choppers by Tech N9ne. This song features some of the most famous and fastest rappers, Busta Rhymes, Yelawolf, Twista, with Aaron Dontez Yates. Aaron Dontez Yates was born on November 8, 1971, in Kansas City, Missouri, U.S., better known by his stage name Tech N9ne. He is a rapper, singer-songwriter, and record producer. He has sold over 2 million albums and has had his music starred in film, television, and video games.

Rap god is one of the fastest songs by Eminem. Marshall Bruce Mathers was born on October 17, 1972, in St. Joseph, Missouri, the U.S. is popularly known as Eminem. He is a rapper, songwriter and record producer. Eminem is among the best-selling music artists of all time, with rated worldwide sales of over 220 million records. This song crossed 1.2 Billion views on youtube. Fastest Rap Song Ever.

Read more: 10 Best Make-Out Songs Must Listen With Your Lover

This is one of the fastest rap songs ever by Twisted Insane. Michael Johnson was born September 22, 1982, in San Diego, California, the U.S, known by his stage name as Twisted Insane. He is a rapper and songwriter. Insane has released eleven studio albums. While in San Diego, he founded the record label Brainsick Muzik, to which other similar rappers are also signed.

One of the fastest rap songs you must listen to by Busta Rhymes. Trevor George Smith Jr. was born on May 20, 1972, in New York City, the U.S., known professionally as Busta Rhymes. He is a rapper, songwriter, record producer, and actor. He has received 12 Grammy Award nominations for his work, making him one of the most nominated artists without winning.

This song is Godzilla by Eminem, featuring Juice World. Song was released on 10 March 2020. One of the fastest rap songs. It has crossed over 398 million views and 7.7 million likes on youtube.

Ricky Raphel Brown was born on January 28, 1985, in Seattle, Washington, the United States, are known by his stage name NoClue. He is a rapper from Seattle. NoClue is best known for winning the title of the world’s official “Fastest Rap MC” by Guinness World Records, for rapping 723 syllables in 51.27 seconds (14.1 syllables per second) on his track “New West” in January 2005. Fastest Rap Song Ever.

“That Music” was released eight years ago by Crucified. This song has crossed over 1.4 million views on youtube. This song depicts the pinnacle of war between humans and music.

Look at me now song by Chris Brown, one of the fastest rap songs. This song has over 522 million views and 3 million likes on youtube. Christopher Maurice Brown was born on May 5, 1989, in Tappahannock, Virginia, U.S. He is a singer, songwriter, dancer, and actor. Brown was involved in his church choir, and several local talents shows from a young age. He is having signed with Jive Records in 2004.

This song, “60 Second Assassins”, features Busta Rhymes, Layzie Bone, Twista & Jaz-O. One of the fastest rap songs. This song has crossed over 1.1 million views on youtube.