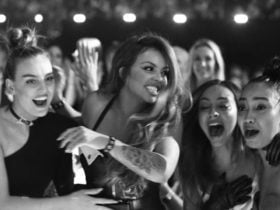 Little Mix Reveals Release Date Of Upcoming Album ‘Between Us’

American singer and songwriter, Billie Eilish has released her brand new single named ‘My Future‘ directed by Andrew Onorato and produced by her brother FINNEAS(in Chop Studio) during the coronavirus lockdown. – Watch the full animated music video below.

Eilish announced the track release with sharing its animation-centered cover art on Instagram on 25th July. After the release of her Grammy-winning debut album WHEN WE ALL FALL ASLEEP, WHERE DO WE GO?, she released her new single “everything I wanted,” and now her new song is finally here.

Eilish wrote in a statement, “It’s a song that’s really really personal and special to me, when we wrote this song, it was exactly where my head was at hopeful, excited and a craaaazy amount of self reflection and self growth.

Billie Eilish ‘my future’ out now! Like This Track, Stream and download the full track by clicking here.

On 15th Jan, Billie Eilish announced that, she will perform new theme song named “No Time To Die” for next upcoming movie of James Bond. In March, They went on the iHeart Living Room show for America, performing an acoustic version of the “bad guy.” Then both of them performed on the Global Citizen One World: Together at Home broadcast in April, covering the Bobby Hebb soul classic “Sunny.”