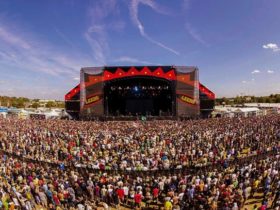 The track, “Hot Shit” marks Cardi’s first single as a solo artist since 2021, when she released the track “Bet It.” Speaking about the visual shows Cardi walking up along the side of a building and appearing atop a skyline. Durk and Kanye also appear in the visual, directed by Lado Kvataniya.

In April, Kay Flock teamed up with Cardi B for a track named “Shake It” Ft. Dougie B & Bory300.