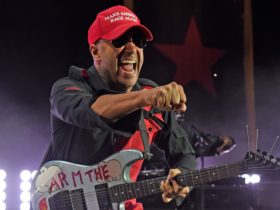 Tom Morello Drops Unreleased Track ‘You Belong To Me’

French electronic music duo formed in Paris, Daft Punk announced their break up in the video titled “Epilogue” they shared. Watch the full video below.

The duo’s longtime publicist, Kathryn Frazier, officially confirmed the split to Variety and declined to provide further details. The duo shared the 8-minute video clip via Youtube, where Thomas Bangalter and Guy-Manuel de Homem-Christo — who for many years have concealed their features behind a robot concept, walking around the desert, wearing in their familiar space helmets and leather jackets.

MUST READ – KSHMR Teases Second Single, ‘AROUND THE WORLD’ From Debut Album

After a few moments, one of the members looks at the other, removes his jacket, and reveals an energy pack on the back. The other touches a button on the pack. The first member walks away quickly and then explodes. The scene cuts to a sunset, or possibly a sunrise, as a choral version of the group’s song “Touch” plays.

In 2001, They had dropped their second album, “Discovery”, led by the single “One More Time,” the “disco-very” implicit in the title was no accident, as the album was more pop in nature than the debut and set a trend for upending expectations.

In the meantime, they set the sonic tone for the new group with their first single, “The New Wave,” released in 1994. It was followed the next year by “Da Funk,” which became a European hit single and formed the template for their debut album, “Homework,” released late in 1996.