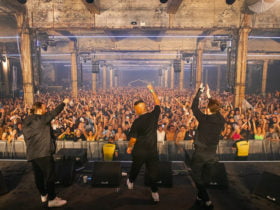 This is Eminem’s first interview since the release his “Music To Be Murdered By” album. Crook and Em discuss everything from Eminem’s new album to the current state of the rap game in 2020. Eminem also answers fan questions and discusses his top 50 rappers of all time list.

According to Eminem, he never said he wasn’t a guest in hip-hop. “I’m absolutely a guest, I never said I wasn’t,” he told Crooked. He went on to say, “I never said I was the king of anything,” adding that he places his focus on the craft above the titles and rankings.

“It was based off that, that I started thinking, ‘I wonder if I could play off this whole Alfred Hitchcock thing?'” he explained. “I had it even more intertwined than it was, but we had to pick and choose the best pieces to put on there for sampling issues.”

Eminem(Real Name Marshall Bruce Mathers III) is an American rapper, songwriter, record producer and record executive. He is one of the most successful artists of the 21st century. In addition to his solo career, Eminem was a member of the hip hop group D12.