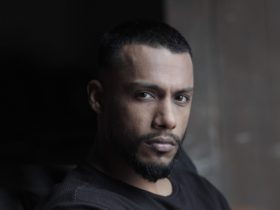 The British virtual band, Gorillaz has teamed up with the Cure’s, Robert Smith for the brand new song named ‘Strange Timez‘ directed by Jamie Hewlett. Watch the full video below.

The track marks episode six from the series Song Machine. Earlier this week, Gorillaz teased ‘Strange Timez‘ cover art via Twitter and wrote that “Coming up on Song Machine… It’s @RobertSmith.” Yesterday, the singer, Robert Smith shared the teaser of the track via Twitter.

In July, They released their latest new single named ‘PAC-MAN’ ft. ScHoolboy Q from Song Machine series. The track ‘PAC-MAN’ is the fifth installment of the ‘Song Machine’ series. It was recorded in London prior to the COVID-19 pandemic, with Gorillaz assisted by producers Prince Paul and Remi Kabaka Jr.

The virtual band is collaborating with multiple artists since announcing season one of the series in January. They dropped a new song called ‘Momentary Bliss’ ft. Slowthai & Slaves, from Song Machine, Season One Episode One.

In the animated video, Gorillaz’s mini vanity van go to the moon, then on the next clip, the Robert Smith face appears on the moon while singing his song, after that, Gorillaz reached the moon and check out the environment, then they start their moon mission. Know more about the track watch the full video below.

Meanwhile, The 10-episode project to celebrate their 20th anniversary as a band has seen them collaborate with Slowthai, Slaves, Fatoumata Diawara, Peter Hook, Georgia, and Octavian.

The Gorillaz ALMANAC also will feature 120+ pages of video games, puzzles, new paintings, and comedian strips, revealed by Z2 Comics. They’ve been engaged on one other project within the type of their first hardback annual, which is ready to releases in October.