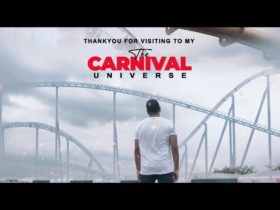 Korean pop girl group, ITZY has officially announced that it will be releasing its new album, ‘Guess Who‘ next month(In April). Check out the post below.

They shared the album’s first poster via Twitter. The album will be released on 3rd April[next month]. Pre-save the full album by clicking here.

“Come as a surprise for their fans”, JYP Entertainment, the girl group’s agency, said in a statement that the upcoming release in an interview with Korea Times. “would come up with offbeat dance moves and styling to showcase something different this time”.

The group premiered the song during their “FAN PARTY LIVE”, a virtual fan event held on the same day. Earlier this week, The group also released the digital single ‘Trust Me (MIDZY)’, a heartfelt song dedicated to their fans.

In January, They also released their debut English-language EP, ‘Not Shy (English Version)’, which included English versions of all ‘Dalla Dalla’, ‘Icy’, ‘Wannabe’ and ‘Not Shy’). Last year In August with the EP ‘Not Shy’, featuring the lead single of the same name.