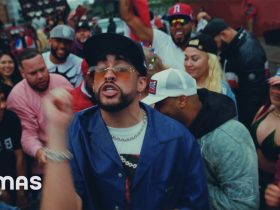 American rapper, Kanye West’s album, “DONDA” has updated a new description on Apple Music. Check out the post below.

According to the source, A new description under the album on the Apple Music streaming service hints at a number of high-profile features. It reads: “Yeezy’s 10th solo album features a wealth of some of the MC’s favorite voices.”

Still, the album has not been unreleased yet, The fans are now looking at a potential release date of August 20 after previously hoping for its arrival on Sunday (August 15).