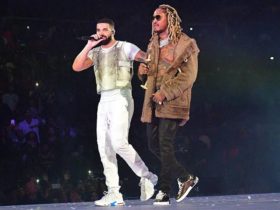 The Indian rapper and MTV hustle contestant King Rocco has released his brand new full desi hip-hop album named ‘The Carnival.’ Listen to all the tracks below.

The album, ‘The Carnival‘ features 8 tracks like, ‘She Don’t Give A’, ‘Thoda Samjha Karo,’ ‘Dracula,‘ ‘90s,‘ ‘Mafiia,‘ ‘Let The Eyes Talk,’ ‘IICONIC,‘ and ‘Tu Aake Dekhle.’ In the album, every song has its own stories, expresses his deep feelings about love, life, and gives motivation to us. If you really love someone or really want to do something big in life, you will definitely relate/feels all his songs.

On 12th June, King announced the full album, ‘The Carnival‘ via Instagram, also he shared the full playlist and dates. Now King’s new album finally arrived now. Must listen to all the tracks from the album here.

This song is gem and motivation for every struggling woman who is working her chance to make a difference. Every line of this song gives us motivation and feels that women have a lot of struggles in their life and we have to encourage and give respect to all the women.

The track beats are so cool with great lyrics, the track gives a smooth feeling, most of the couples could relate their journey. The lines make the rap or song nice and that all things make King different from every other artist.

In this track, King reminds his old love in the car. After the breakup, what we feel in real life, this song has all those words. This is a really amazing song by King Rocco, hope you guys like it.

The track is about childhood and what happens when you grow up and want to always remember the time but it can never come back. Literally, King is so unique man, he is experimenting with his music and still giving hits.

As we all know King songs have a very different and unique vibe and energy in his songs. Awesome rap by the king, Lyrics has the fire in his verse, also hook is great, and one of the great specialties in his song is the melody input, his songs are always motivating. Know more about the track, listen here.

In this track, the 4 lines of the hook are the most melodious lines, as we all know king makes the most catchy songs in the current industry with different vibes. But this track should have released before the track Dracula because it shows the story behind Dracula.

The song, ‘🔥 I I C O N I C 🔥’ music is produced by Auhm, Lyrics, Composed and sung by King, Mix And Mastering By – Satyam HCR. Get Ready For The Goosebumps.

The final track ‘Tu Aake Dekhle‘ music is produced by Shahbeats, Lyrics, Composed and sung by King, Mix, and Mastering By Satyam HCR. Listen to the full track here.