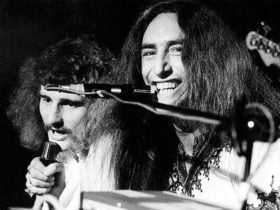 American musician & record producer, KSHMR has released his debut album’s title track, “The World We Left Behind” Ft. KARRA. Listen to the full song below.

KSHMR shared the title track news via social media and wrote that“‘The World We Left Behind’ w/ @IAMKarraMusic is out now, the first song from my debut album “Harmonica Andromeda.” I truly believe this is the best music I’ve ever made — I hope you all feel it the way I do.”

“The best song I’ve ever made.” He added, “I tear up listening to Karra’s chorus. The song embodies so much of what I love in music, youthful purity instead of adult bravado. It’s a bit Lion King, a bit Porter Robinson. I’m really excited for people to hear this and the rest of the album.”

The song has pure test of KSHMR music, it amplifies KSHMR’s vast sonic universe through a culmination of sounds he’s picked up from around the globe. Pre-save the full album by clicking here.

Earlier this month, he also said that while teasing the album via Twitter, “My debut album is one of the most ambitious, maybe even one of the best electronic albums of all time… I know it sounds crazy but I just can’t imagine anybody else taking you on a journey quite like this, or even trying.”

Now, this is the first single he shared, the rest of the tracks are on the way. Also, In Aug 2020, He & Brazilian DJ, Alok released their latest single ‘Let Me Go.‘