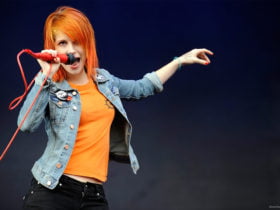 The new song, ‘Prisoner‘ is taken from her upcoming new album, ‘Plastic Hearts,’ which will be released on November 27th. Pre-save the full album by clicking here. It is directed by Alana O’Herlihy & Miley Cyrus.

Back in August, Cyrus first teased the track when she posted a photo on Instagram of her, Dua Lipa, and producer Andrew Watt (best known for his work with Post Malone and Ozzy Osbourne) in the studio. Meanwhile, the album Plastic Hearts will also feature appearances from Billy Idol and Joan Jett.

Also, Miley Cyrus also dropped “Edge of Midnight,” a fan-made remix of the song that mashed it up with Stevie Nicks’ classic, “Edge of Seventeen,” The track is the first main song from Cyrus’ upcoming seventh studio album, Plastic Hearts.

Recently, Dua Lipa collaborated with Belgian singer and musician, Angèle for the new song, ‘Fever.’ The track is the first new track since she dropped her new album ‘Future Nostalgia.’