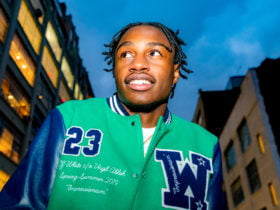 The track follows the first single released from the Smoke’s since the deluxe edition of his debut album ‘Shoot for the Stars, Aim for the Moon’ last year. It features on the soundtrack to the forthcoming Eddie Huang film Boogie, in which Pop makes his first film appearance.

Last year, In Feb 2020, The rapper Pop Smoke (Real Name Bashar Barakah Jackson) shot dead at just 20 in an armed robbery at his home in the Hollywood Hills.

“They were tough 16-hour days, overnights, and he shot five overnights in a row. Kids were coming on the bridge to watch us shoot the scenes. We would play Pop’s record,” Huang told The New York Times.

“All our actors, the extras, the kids on the bridge watching us shoot scenes, everyone was doing ‘The Woo’ dance. It was pretty special.” Last month, the rapper posthumously appeared on Fredo’s new album ‘Money Can’t Buy Happiness’.