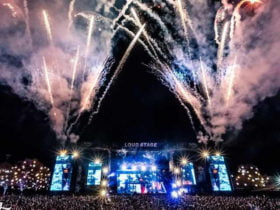 American rapper and songwriter, Roddy Ricch has dropped his new 3-track EP named “The Big 3.” Listen to the full EP below.

Back in December 2021, Roddy Ricch promised fans that the third edition of his celebrated Feed Tha Streets mixtape series was on the way. Though we’d still be begging him for it some six months later, Roddy delivered a holdover of sorts in The Big 3.

The title is a reference to the single’s three songs, all of which paint a clearer picture of the LA MC’s lifestyle. On “Real Talk,” the Mustard collab he previewed at New York City’s Summer Jam festival, Ricch reminds listeners how he got to where he is: “Ain’t nobody out-vibing me,” he spits.

He’s unrepentant about the frivolousness of his spending habits on “Tootsies,” and then, on “No Mop,” forthright about the lengths he’ll go to reward exceptional lovers. Together, the songs comprise a brief yet sturdy reminder that it’s still Roddy’s world and the rest of us are just living it.