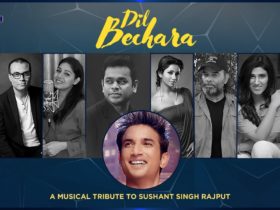 ‘Dil Bechara’ A musical tribute to Sushant Singh Rajput By A. R. Rahman

Music streaming company, Spotify is testing its new social media feature like Snapchat-Instagram stories features on the artist profile. Check out the video below.

Spotify spoke person said to Engadget.com that “this is a test, so there’s no word as yet on if or when you’ll see more stories or whether you’ll be able to add them to your own playlists eventually. At Spotify, we routinely conduct a number of tests in an effort to improve our user experience,

He added, “Some of those tests end up paving the path for our broader user experience and others serve only as an important learning. We have no further news to share on future plans at this time.”

Meanwhile, earlier this year, The company started a public test of stories, when it allowed some influencers to add them to playlists. Including Instagram, Snapchat, Facebook, YouTube, Twitter, and even LinkedIn also have this stories feature. It emerged last yr that Spotify was engaged on a story feature for artists.

Check out The Christmas Hits story features videos below from several artists who are featured on the playlist, including Jennifer Lopez, Kelly Clarkson and Pentatonix.

READ MORE – What Goes Into Starting A Music Record Label