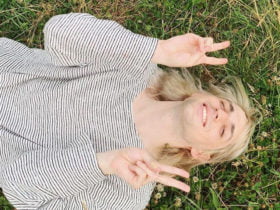 The American singer, Taylor Swift has officially released her brand new album named ‘Folklore,’ and she also dropped the music video for the album track “cardigan.” – Stream and download the full album below.

The album, ‘folklore‘ is the Taylor Swift’s eighth album and her follow-up to last year’s Lover. The 2019 LP got a much more traditional rollout, including music videos for “ME!,” “You Need to Calm Down,” “Lover,” and “The Man.”

The music video “cardigan,” is directed by Swift, it is a Chronicles of Narnia-style visual where she travels to a magical forest through her piano. At the end of the video, she gives a beautiful message, “A special thank you to our on-set medics, COVID-19 compliance personnel and the crew for operating under the strictest guidelines including wearing PPE, practicing thorough sanitization and respecting social distancing during the video shoot.”

She express the story of the album, “A mere 11 months passed between the release of Lover and its surprise follow-up, but it feels like a lifetime. Written and recorded remotely during the first few months of the global pandemic,

“folklore finds the 30-year-old singer-songwriter teaming up with The National’s Aaron Dessner and longtime collaborator Jack Antonoff for a set of ruminative and relatively lo-fi bedroom pop that’s worlds away from its predecessor.” She added.

“When Swift opens “the 1”—a sly hybrid of plaintive piano and her naturally bouncy delivery—with “I’m doing good, I’m on some new shit,” she added continued, “you’d be forgiven for thinking it was another update from quarantine or a comment on her broadening sensibilities.

“It’s a work of great texture and imagination. “Your braids like a pattern/Love you to the moon and to Saturn,” she sings on “seven,” the tale of two friends plotting an escape. “Passed down like folk songs, the love lasts so long.” For a songwriter who has mined such rich detail from a life lived largely in public, it only makes sense that she’d eventually find inspiration in isolation.”