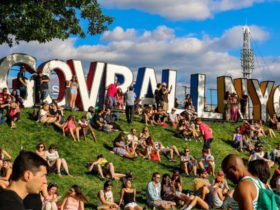 American EDM Duo DJ, The Chainsmokers have dropped their new song named “High,” since 2019. Watch the full music video below.

The track, “High” is co-written and co-produced by Alex Pall and Taggart, and marks the first track from the Chainsmokers’ fourth album TCS4.

“The song perfectly captures the spirit of today’s relationships, the lengths we will go for someone we love, and the lies we tell ourselves to continue on unhappily,” the band explained in a statement. “However, underlying these dark and often contentious lyrics is a production that feels celebratory because we all know at the end of the day, we never listen to advice, we do what feels best for ourselves and keep telling ourselves it will be different this time.”

Also, The Chainsmokers will perform “High” live for the first time ever during the Los Angeles Rams vs. San Francisco 49ers NFC Championship Game Halftime Show this Sunday.