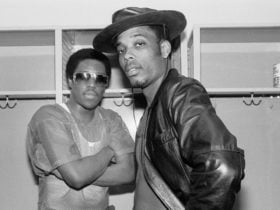 The rock band, The Rolling Stones have revealed the new collaboration with the band, The Killers & Jacques Lu Cont for new version of their track ‘Scarlet.’ Check out the post below.

Last month, They dropped an unreleased track named ‘Scarlet‘ featuring Led Zeppelin‘s Jimmy Page, the track will feature on the band’s forthcoming expanded edition of their 1973 ‘Goats Head Soup’ album, joined by two previously unreleased tracks “All The Rage“ and “Criss Cross,” plus many more rarities, outtakes, and alternative mixes.

Earlier this month, the band shared a new remix of ‘Scarlet’ by The War On Drugs, and it seems like The Killers and Lu Cont are the subject of another new version of the track.

Recently, The Rolling Stones announced that they will be opening a world-first flagship store on London’s Carnaby Street On September 9th, 2020.

In the meantime, Rolling Stones guitarist Ronnie Wood has additionally hinted that new unique music from the legendary band is in the works.

“There’s some lovely music on the hob, you know, it’s on the back burner,” he said. “We’re bringing it towards the front of the hob now, but gradually.”