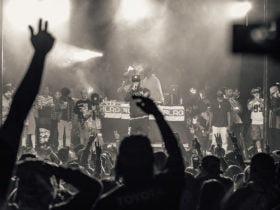 12 Motivational Hip Hop Songs That Will Inspire You

Hello my dear friends, hope you all are doing fine. Guys, today’s topic of discussion is “sailor Moon characters.”

Well, anime is just the perfect thing for those who are fascinated with animation.

The type of animation which narrates an amazing storyline. You know the visuals leave a hard impact on you to rewatch the anime.

What I personally believe is that anime is like a dreamland, carting great stories with a plethora of emotions. Speaking of sailor moon characters, these are very unique and interesting characters to know about.

This article comprises a list of 15 such sailor moon characters who are most popular. The article will spotlight their personality, appearance, and little of their role in the anime.

So, without any further delay, let’s dive straight into the list of sailor moon characters.

Sailor moon characters Ranked on the basis of their popularity:

Usagi Tsukino, is the Sailor Guardian of love and justice, Sailor Moon.

Originally from a prosperous civilization on the Moon known as the Moon Kingdom, she was reborn on Earth and re-awoke as the leader of the Sailor Senshi.

Usagi has blue eyes and long blonde hair that she wears in odango. She has porcelain skin and a slim figure. She is the shortest of the Senshi.

The outfit that Usagi usually wears is a blue middle-school sailor uniform. In the summer, she wears a white, short-sleeved blouse with puffed sleeves.

In the beginning, Usagi is seen to be a cheerful, immature girl. She cries easily and is often overtaken with emotion.

She also displays an unwavering hope and sees good in her enemies that others may not.

Usagi has a pure heart and is always there for everyone. She can be jealous at times. One of the best Sailor Moon Characters ever.

She has straight long black hair with a purple shine and purple eyes. She stands at about 160  cm or 5 feet 3 inches.

The girl is often seen wearing her red and white traditional priestess uniform or her winter school uniform.

Her uniform between both winter and summer school uniforms is dark gray with red linings.

The character’s uniform in Sailor Stars is the same as her winter school uniform from her middle school but has a minor color change.

Rei is a fiery, boy-crazy, priestess with ambitions to become a singer, songwriter, model, and voice actress and eventually settle down into marriage.

Her relationship with Usagi was turbulent, and the two often argued with each other.

She seemed to show her affection to the people she cares about the most in odd ways, such as teasing Usagi.

The character’s personality reflects her Sailor Mars power. She is a hothead, who gets into an angry rage quite easily. She is shown to be tough on others from time to time.

Some special skills and abilities of rei include,

Makoto Kino, is the civilian identity and present-day incarnation of Sailor Jupiter.

She is the fourth Sailor Senshi to be introduced in the anime. The character has wavy chestnut hair that is always seen styled into a ponytail and held up by a green hair tie.

She is also always seen wearing pink rose earrings on her earlobes. One of the best Sailor Moon Characters ever.

Makoto is very tall for a Japanese schoolgirl and is the tallest girl in the Inner Sailor Senshi.

The girl is a tomboyish teenage girl who transfers to Juban Public Middle School in the first season.

She had lost her parents in a plane accident when she was younger and lives on her own in an apartment.

People are usually intimidated to approaching her due to her height, tough appearance, strength, and ability to fight, and she was believed to have been kicked out of her previous school due to fighting.

Minako Aino is the present-day incarnation of Sailor Venus and the civilian identity of Sailor V.

The girl is the original Sailor Guardian, the protagonist of Codename: Sailor V, and the leader of the Inner Sailor Guardians in the Sailor Moon manga.

The character has blue eyes and blonde hair, preferring to wear her hair down with a simple red bow in it.

When she was in junior high, she wore a sailor-style school uniform like the other Sailor Guardians did in their civilian forms, but with a few differences.

Also, the uniform was the most classic or orthodox among those of the Sailor Team.

Ami Mizuno is the civilian identity and present-day incarnation of Sailor Mercury.

Her powers are based on water and ice. She is an intelligent middle-school student who is adept with computers.

Ami Mizuno is a teenage girl who has short, dark blue hair that reaches her neck, and blue eyes. She stands at about 157 cm or 5 feet 2 inches. At times, Ami will be seen wearing reading glasses.

Like Usagi, she wears a standard Azabu Juban school uniform. One of the best Sailor Moon Characters ever.

Ami is depicted to be a sweet, kind, gentle, and loyal girl who is slightly insecure. In the beginning, she relies on the opinions of her mother, classmates, and teachers.

As the series progresses, she becomes stronger and more confident.

She is the most sensible out of the Inner Senshi, and she dislikes conflict; especially the fights between Usagi and Rei.

Her favorite subjects were math and science. She also has a secret love of romance novels and pop culture but is embarrassed to say it.

Mamoru Chiba is the present-day incarnation of Prince Endymion and the civilian identity of Tuxedo Mask.

The character is very attractive, and he gets a lot of attention from other girls.

His body is considered to be one of his most attractive features, with a lean but very muscular build, weighing 177 lbs. and standing 6’2″ in height.

He has long legs and black hair and blue eyes, his biceps measure 25″ in diameter, and his pecs measure 12″ in diameter.

However, Mamoru is very protective of Usagi and has a good nature.

Luna is a talking black-purple cat that advises Usagi Tsukino/Sailor Moon and the rest of the Guardian Senshi through the anime series.

This is the first anime depiction of the original manga character. The character has the ability to perform a midair somersault to summon items for the Sailor Senshi.

She also has sentience as well as the ability to speak, which she must frequently hide to assume the identity of a normal cat.

Luna is also very agile, able to jump quite high, and can use her claws to scratch enemies and cause damage, although this is usually minimal.

Artemis is Minako’s white guardian cat, as well as her advisor.

Artemis is a white tomcat with short fur and blue eyes. Like Luna, he has a golden crescent moon on his forehead to show his allegiance to the Silver Millennium.

He is slightly bigger than his counterpart. Artemis still does his best to help Minako realize and chase her dreams; sometimes pulling notebooks and audition papers out of her desk and submitting them in her place.

Artemis has the odd habit of turning off Minako’s alarm clock, hugging it, and carrying it into her bed, thus being the major reason for Minako being late for school more often than not.

Zoisite is the third of the Shitennou to be introduced. Zoisite has wavy auburn hair pulled back in a ponytail.

The ponytail held in a green band. Zoisite has a blue-grey suit with green trim.

However, He has a thin black belt, tall black boots, white gloves, and small green stud earrings. One of the best Sailor Moon Characters ever.

He teleported with the effect of petals surrounding him. He was also able to levitate in the air, as well as levitate the Rainbow Crystals towards him.

Although He used these petals to distract Tuxedo Mask and the Sailor Senshi, he was also capable of transforming them into needles.

The character has displayed the abilities of pyrokinesis as he tried to incinerate Usagi and Mamoru on an elevator.

He could also conjure up shards of ice, and attempted to stab Mamoru Chiba at least three times.

Nephrite, the 2nd of the Shitennou to be introduced. She keeps the same appearance in the anime as he does in the manga.

His uniform is similar in style to his predecessor; a blue-grey suit with yellow trim with epaulets on his shoulders; a black belt, tall black boots, white gloves, and small yellow stud earrings

However, He could also call down lightning from the sky. He displayed skills in swordplay and martial skills, as he is able to battle three you at once.

Queen Serenity is the queen of the Moon Kingdom during the Silver Millennium and the mother of Princess Serenity.

Queen Serenity is slender with fair skin and bright silver eyes. One of the best Sailor Moon Characters ever.

She has long silvery-white hair done up in odango. She wears a white dress with a bow on the top, adorned with a gold crescent brooch.

Also, She has a golden-colored crescent moon on her forehead, which is the mark of the Silver Millennium itself and the royal family’s symbol.

Jadeite is the first of the four Shitennou to be introduced. Jadeite had the same appearance that he had in the manga.

In the anime, his hair is blonde and his eyes are blue. He wears the standard grey Shitennou uniform, which has red accents and is coupled with a pair of knee-high maroon boots. The character is shown to have telekinetic powers in episode 3.

He can use it to stop Sailor Moon’s Moon Tiara Action in midair, create barriers to protect himself, or move airplanes around to crush the Sailor Guardians.

Jadeite can perform powerful illusions, such as in episode thirteen when he made Tokyo look like it was set on fire or projected what looked like a giant version of himself over Tokyo.

No doubt, He is a master of disguise. In nearly every episode he appeared in, Jadeite takes on the appearance of a normal human during his plans.

Kunzite is the 4th and most powerful general of the Shitennou. Kunzite has long white hair and lightly tanned skin.

Like the other generals, he wears a gray uniform with blue trimming, with white gloves, but he wears a white cape and his epaulets have a blue gem on top.

Kunzite was the most powerful of the four Shitennou. He has power over dark energy, which he can use as energy blasts, energy blades, or an energy dome, which he used to trap the Sailor Senshi in.

He was also able to levitate the Rainbow Crystals towards his grasp. With that, he can create a dark energy dome that was able to absorb all of Sailor Senshi’s attacks.

Naru Osaka is Usagi’s best friend. Naru has wavy red hair that is slightly shorter than her shoulders and often wears a darker teal bow in her hair.

She has teal eyes, unlike her blue-eyed manga counterpart. When she is not wearing her school uniform, she often wears solid-colored skirts and tops.

Gurio Umino is a smart, stereotypical nerd who was a classmate of Usagi Tsukino and Naru Osaka.

He is usually called by his family name “Umino”, is a socially-awkward friend of Usagi Tsukino and her best friend Naru Osaka.

He is very intelligent, but at some point, he could be arrogant and a bit of a “Mr. Know It All”.

He was usually the one who kept the others up-to-date on information on Sailor V, the strange crimes and rumors in Tokyo, and on students such as Ami Mizuno and Makoto Kino.

Umino is a 14-year-old boy with blondish-colored hair. He was always seen in his school uniform but in the 2nd episode in a scene with Usagi and Naru, he was wearing a different outfit.