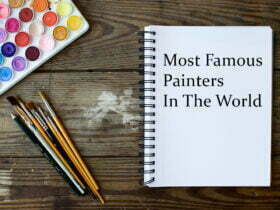 20 Most Famous Painters In The World

Hey guys, Here we are presenting the list of Best South India Actor. South Indian Movies are famous for action and high-voltage drama. Moreover, it may also have rom-com, fantasy, and thriller genres that blow your mind.

Besides, there have been various superstars of South India, from Thalaiva to Jr NTR. They also have a massive fanbase and popularity all over the world. Do You wanna know the Best South Indian actors?? So, Check out the list given below:

Rajinikanth is a South India Actor. He is also a screenwriter and producer. He started his career with the Tamil movie Apoorva Raagangal. Rajinikanth made his debut in Bollywood with Andha Kanoon. Furthermore, He has received Padma Bhusan, Padma Vibhushan, Dadasaheb Phalke Awards etc for his excellent skills.

Mahesh Babu is a South Indian actor and producer. He is the son of the actor, Krishna Murthy. Babu appeared as a child artist in various movies. Afterward, He made his debut as a lead actor in the movie Rajakumarudu. Indeed, Some of his super hit movies are Athadu, Pokiri, Okkadu, Khaleja, Dookudu, etc.

Allu Arjun is one of the most popular south Indian actors of all time. He was born on 8 April 1982. He is one of the highest-paid actors in South India. In fact, Arjun made his debut with the film Gangotri. Be it in action, drama, or comedy genres, he has played impressive roles. He has also received numerous awards including five South Filmfare Awards, Nandi Awards, CineMAA Awards, etc.

Prabhas is an Indian actor born on 23 October 1979. He started his career with the film Eeswar. He has played a commendable role in the action movie Baahubali. After this movie, Prabhas become more popular. Indeed, He is the first South Indian Actor to have a wax statue at Madame Tussaud Wax Museum.

ALSO-READ- 12 Best Black Actors OF All The Time

Joseph Vijay Chandrasekhar is an Indian actor, playback singer, and dancer as well. He is the highest-paid actor in South India. He started his career as a child artist at the age of 10. His notable works are Ghilli, Pokkiri, Thuppakki, Theri, Mersal, Sarkar etc. Significantly, Vijay has won numerous accolades including Indian and International Awards. One of the most popular south Indian actors of all time.

Kamal Haasan is a popular South Indian actor. He is also a director, playback singer, and filmmaker. He started his acting career at the age of 4. For this role, Haasan won the President’s Gold medal. Even, he has acted in more than 230 films. He has won Padma Shri, Padma Bhusan, 20 Filmfare Awards, and 4 National awards.

Vijay Deverakonda is an actor and film producer. His father was a Tv serial director. He made his debut with the rom-com movie Nuvvila. Some of his best movies is Arjun Reddy, Taxiwaala, Mahanati, Pelli Choopulu etc. Moreover, He is the founder of a non-profit Foundation that is used to help people. One of the most popular south Indian actors of all time.

Saravanan Sivakumar aka Suriya was born on 23 July 1975 to actor Sivakumar. He is one of the highest-paid actors in South India. He started his career with the movie Nerukku Ner. Afterward, he gets fame with the hit movies Kaakha Kaakha, Nandha, Pithamagan, Ghajini, and Singam, and 24. He married actress Jyothika in the year 2006.

Chiranjeevi is an Indian actor and former politician. He has acted in Tamil, Kannada, Telugu, and Hindi movies. He has won several accolades Nandi Awards, Filmfare Awards, and Padma Bhushan. One of the most popular south Indian actors of all time. Moreover, Chiranjeevi entered politics in 2008. He was the first actor to be invited to the Oscar ceremony in the year 1987.

Konidela Ram Charan Teja is a South Indian actor and producer. He is the son of the veteran actor Chiranjeevi. He is one of the highest-paid actors in India. Ram Charan gets popular with the movie Magadheera. Further, He owns the Konidela Production Company. The actor Pawan Kalyan is his uncle and Allu Arjun is his cousin.

Akkineni Nagarjuna Rao is an actor and producer as well. He was born on 29 August 1959 to the veteran actor Akkineni Nageswara Rao. Initially, he started as a child artist. Then, he debuted as a lead actor in the movie Vikram. Geetanjali, Shiva, Oopiri, Annamayya, Manam, and Don are some of his best movies.

Naveen Kumar Gowda is known as Yash. He is a South Indian actor who works in mostly Kannada movies. He is one of the highest-paid Kannad actors. Indeed, Yash started his career with the tv series Nanda Gokula. His debut movie is Moggina Manasu. He has acted in hit movies like KGF, Raja Huli, Masterpiece, Rajdhani, etc.

Akkineni Naga Chaitanya is an Indian actor. He is the son of the famous actor Nagarjuna. He made his debut with Josh. His blockbuster movies are 100%Love, Manam, Dhada, Ye Maya Chesave, etc. in fact, He married to Samantha Ruth Prabhu and they separated in 2021 after four years of marriage. Daggubati Venkatesh is his maternal uncle.

Nandamuri Taraka Rama Rao aka NTR Rama Rao Jr is a South India actor and singer. Indeed, He is the grandson of former CM of Andhra Pradesh N. T. Rama Rao. He started his career as a child artist in Ramayanam. Significantly, Student No 1, Jai Luv Kush, Aadi, Simhadri, and Brindavanam are some blockbuster movies.