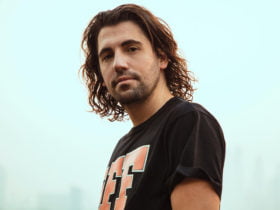 He added, “My new novel #TheDarkLady is inspired by Shakespeare’s series of ‘Dark Lady’ sonnets. Most period stories tend to focus on elites and so I wanted to write something from the perspective of poor people from the streets back then and was pleasantly surprised by how much research was available into life in the slums of sixteenth-century London and also on the presence of Black people and other ‘foreign’ immigrants at the time.

“Although it’s set in 16th century London and inspired by Shakespeares’ work “The Dark Lady” is also inspired by one of my other passions… the history of the ‘medieval‘ West Africa.

“The backstory for Shakespeare’s “Dark Lady”, I imagined a migration from the kingdom of Benin, across Mali and through Timbuktu, into the Mediterranean into Venice and finally to London. The Dark Lady’s father’s story becomes the inspiration for Shakespeare’s “Othello”.”