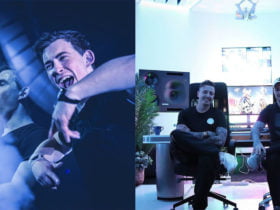 The rapper, Amine has dropped his new single ‘Compensating‘ Ft. Young Thug, and also announced his new album ‘Limbo’ out on August 7 via Republic – Listen to the full song below.

The new track ‘Compensating’, features Young Thug and produced by Canada’s T-Minus. The track is the second collaboration Aminé has taken part in recently, following an appearance on Disclosure’s ‘My High’ with Slowthai.

Earlier this year, he shared the new songs “Shimmy” and “Riri.” Since finding a hit with “Caroline” in 2016, the Portland rapper released his debut album Good for You and followed it a year later with ONEPOINTFIVE.

“It’s something I’m really proud of and something I’ve been putting a lot of effort into for the past two years,” Amine said of the new album in a 2019 interview with Bandwagon. “I haven’t really gone this in-depth with my music in a while, so it feels good.”