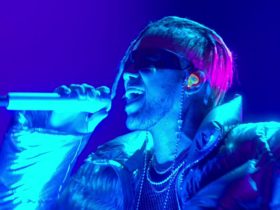 American singer and songwriter, Billie Eilish has dropped her new music video for the upcoming Bond movie theme song named ‘No Time To Die.’ Watch the full video below.

In the video, black-and-white visual is appearing, the pop star starts singing behind an old-fashioned microphone as she croons the track’s haunting lyrics. The music video is directed by Daniel Kleinman, who has designed every title sequence for the Bond series since 1995 and features scenes from the new film.

She sings, “Was I stupid to love you?/ Was I reckless to help?/ Was it obvious to everybody else/ That I’d fallen for a lie? You were never on my side/ Fool me once, fool me twice/ Are you death or paradise?/ Now you’ll never see me cry/ There’s just no time to die.”

Listen to “No Time To Die”, the theme song for the 25th James Bond film, out now :- Click Here.

Recently,  Billie Eilish announced her new documentary film named ‘Billie Eilish: The World’s A Little Blurry.‘ The new documentary will be released in theaters and on Apple TV+ in February 2021. Also, she has nominated for Billboard Music Awards 2020 with BTS, Taylor Swift, Post Malone, Lizzo, Ariana Grande, and many more.

Last month, She shared the ‘Tiny Desk Home Concert‘ video, where she played her two songs “my future” and “Everything I Wanted” with brother Finneas. This year, Eilish has won five Grammy Awards (including Album of the Year) and released the single “my future.” In March 2019, She released her studio debut WHEN WE ALL FALL ASLEEP, WHERE DO WE GO?.