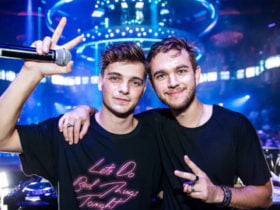 The Pakistani American rapper, BOHEMIA has dropped his brand new song named ‘Rog‘ from the series SNBV2. Listen to the full track below.

The track was written by his father, sung by Bohemia, and he just upload this song for no paid views, No Promotions, this is totally free song by him.

4 days ago, BOHEMIA teased the track via Instagram and wrote that “Rog was written by my dad. Out on the 25th. Just like Raaz, there will be no promotion or video for this song. I also request you to please don’t count views/likes for my poetry. This is part of a series called SNBV2. Thank you all – Roger.”

On 22nd June, Bohemia collaborated with Canadian-Indian playback singer Jazzy B and produced the latest Punjabi song called ‘CROWN PRINCE.’ This was Bohemia’s second collaboration with Jazzy B and first was ‘Nishana‘.

Then, he teamed up with Punjabi musical artist Raman Romana for the track, Attitude. The song is sung by Raman Romana and BOHEMIA, Lyrics given by Deep Fateh.