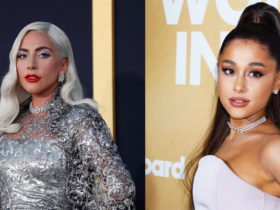 American actress Brie Larson has delivered a beautiful cover of the American singer Ariana Grande’s song ‘Be Alright.’ – Watch the full video below.

The actor Brie shared a little clip of her singing and playing the track on guitar on her Twitter account. In the video, she sings the chorus to the 2016 track, which originally appeared on Grande’s ‘Dangerous Woman’ album, while strumming a turquoise electric guitar.

The breezy cover is hardly the first time Larson has taken on a Grande tune. The Captain Marvel star has previously shared covers of “My Everything,” “God Is a Woman” and “7 Rings” with Samuel L. Jackson.