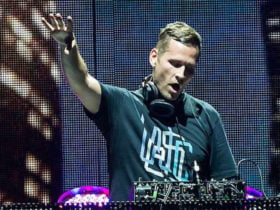 Kaskade Team Up With WILL K & Monstercat For New Single, “Flip Reset”

Scottish DJ & record producer, Calvin Harris has teamed up with Tom Grennan for the stunning EDM track, “By Your Side.” Listen to the full song below.

The EDM maestro’s summer bop is a mood lifter for dark times. He had been teasing this track for a month and now the track is officially here.

In an interview with Apple Music’s Zane Lowe he said, “I am not necessarily working on a new album. My albums became collections of singles, They became compilation albums. That’s a more fun way of doing it because, firstly, every song has got to be good because it’s coming out as a single. And then, secondly, zero pressure as well … So, no, I can’t imagine me doing [an album] probably ever, at this point.”

“Right now at this moment, I think I’m good,” Harris added. “I think I’m alright for now. I like making tunes and just—a bit in the garden and all that. It’s quite nice. So nah, I’m not desperate for it. Not really. It would be nice to do it under the right sort of circumstances, but I don’t know; at the minute I’m good.”

Calvin Harris Team Up With Tom Grennan For Stunning Track, “By Your Side”