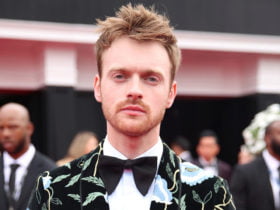 On the latest show of “me & dad radio” on Apple Music, where she discussed two of her favorite songs by him. Pop Singer said while announcing her special guest and brother, “This is our Finneas episode, full of childhood bops, some inspirational songs I and Finneas have loved over the years, some songs we’ve shown each other, songs that we’ve been inspired by.”

“From then on, everybody knows that Donald Glover is like… one of my all-time favorite creators. He’s exactly everything that I idolize about a creator. He’s every single element of what I think is amazing.”

The singer added that ‘Bonfire’ contains “the most hardcore bars I’ve ever heard”, while Finneas revealed that its first line – “Okay, it’s Childish Gambino, homegirl drop it like the NASDAQ” – is their favourite lyric.

“I love that it’s three minutes long because you just rap the whole thing along, as I rap it along, and then it’s done. It’s like the whole thing, and boom,” Eilish said.

On 15th Jan, Billie Eilish announced that, she will perform new theme song named “No Time To Die” for next upcoming movie of James Bond.