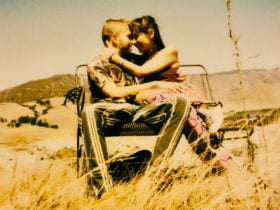 American music artists, Courtney Barnett and Phoebe Bridgers have teamed up for the track “Everything Is Free”(Gillian Welch Cover). Watch the full video below.

On Sunday (August 2), both the artists performed the track live for Newport Folk Festival’s virtual event. The duet came about through Livestream, which showed Bridgers and Barnett perform from their homes of Los Angeles and Melbourne, respectively. The track, “Everything Is Free” has become a music artist favorite in recent years, also covering the treatment from Father John Misty.

Last week, Phoebe Bridgers released her brand new music video called ‘I Know The End.‘ The music video features the singer rising out of the tub of water and running down a dark street in one of her trademark skeleton suits.

The song ‘I Know The End‘ marks her second album ‘Punisher’, which was released last month. Before this track, she released the visuals for singles ‘Garden Song’, ‘Kyoto’, and ‘I See You.’ and recently performed the single “Kyoto” on The Late Show with Stephen Colbert.

Barnett was rescheduled to tour with Nick Cave and the Unhealthy Seeds this summertime before the COVID-19 pandemic. In 2018, She released her last full-length LP, Tell Me How You Really Feel. She as a substitute appeared on a collection of Livestream concert, together with a collaborative present with Sharon Van Etten and Sheryl Crow that benefited Oxfan’s COVID-19 relief fund.