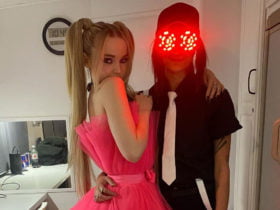 Canadian EDM producer & DJ, Deadmau5 has teased his brand new music called ‘Bridged By A Lightwave‘ featuring Kiesza. Check out the post below.

Deadmau5 shared the 14sec video via his social media while tagging Kiesza & wrote, “mau5 and @kiesza “Bridged By A Lightwave”, out 11.13.20 on @mau5trap.” Pre-save the full song by clicking here.

In the little snippet, Kiesza’s heavy vocals perfectly mixed with Deadmau5’s massive production beats. From the sounds of it, “Bridged By A Lightwave” is a meant-to-be collaboration that’s finally coming to fruition.

The track will be released on 13th Nov. Last month, DEADMAU5 has announced his next drive-in Halloween shows named ‘DAY OF THE DEADMAU5.’ The first Drive-In concert, Day of the deadmau5 will take place on October 29th. Then, he will headline to SeatGeek Stadium in Chicago for two extra spooky nights on October 30th and 31st. Know more about the Drive-In show by clicking here.