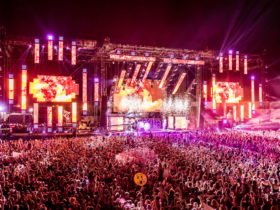 The EDM musician Diplo has confirmed that he recently became a father for the third time with Trinidadian model Jevon King.

Diplo(real name Thomas Wesley Pentz) shared the news on Sunday while celebrating the women in his life on American Mother’s Day.

The DJ Diplo shared a series of three images on his Instagram with the caption, “Thanks for giving me life and helping me create it – the three strongest mothers in the world..”

“I’m still a work in progress but u have given three perfect beautiful boys ? I love you all till the moon and back,” He added.

She marked Mother’s Day by sharing a picture of her son online for the first time.

Diplo (Thomas Wesley Pentz) is an American DJ, songwriter, and record producer based in Los Angeles, California. He is the co-creator and lead member of the electronic dancehall music project Major Lazer, a member of the supergroup LSD, with Sia and Labrinth also working with producer and DJ Skrillex as part of the electronic duo Jack Ü, as well as on Silk City with Mark Ronson.