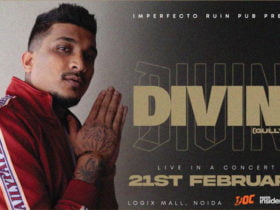 Divine Will Perform Live Concert At Noida This Week

The album tracklist, “GUNGHGAR” features 13 tracks including one Bonus track:

“‘Gunehgar’ is the start of a revolution. I’m going to take that appetite and passion of mine for desi hip hop to unimaginable heights and I hope you are ready!” the rapper said in a statement. “As the year draws to a close, this (album) is my humble gift to my community and my fans, who have waited so long for a music release!.”