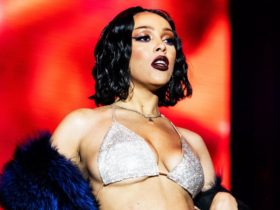 Algerian French music producer, DJ Snake has teamed up with Wade for the new track, ‘Guddi Riddim’ Ft. Nooran Sisters. Listen to the full track below.

The track, “Guddi Riddim” follows the same construction as a couple of other Snake hits, like “Magenta Riddim” and “Maradona Riddim,” as he infuses his songs with a bit of Indian flavor.

The Nooran Sisters produced and wrote the track “Patakha Guddi” for the movie Highway in 2014 and it instantly topped the charts, earning them two of the Mirchi Music Awards in 2015, “Vocalist (Female) Of The Year,” and “Upcoming Female Vocalist Of The Year” as well as the Best Music Debut award of the Global Indian Music Academy Awards and the Best Female Playback Singer award of the Screen Awards.