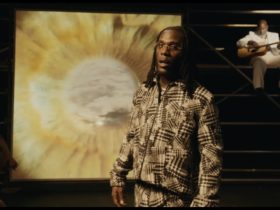 The American rapper Eminem replied to a fan on Twitter and revealed a list of his favourite rappers of all time.

Well known YouTuber NoLifeShaq shared a tweet with a video attached of himself DMing and wrote that: “Who is the greatest rapper of all time.”

Eminem has recently shared a list of his favourite rappers, rapping in his 2002 song ‘Till I Collapse’: “I got a list, here’s the order of my list that it’s in / It goes, Reggie, Jay-Z, Tupac and Biggie/ Andre from Outkast, Jada, Kurupt, Nas and then me.”

In May, during his “Music to Be Quarantined By” playlist on his Siriux XM Shade 45 station, Eminem referred to Shakur as the greatest songwriter of all time.

“OK, this next song is from an artist that I feel like might be the greatest songwriter of all time,” Em said before spinning Shakur’s “If I Die 2Nite.” “Debate what you want about MC skills and all that because he had that too.”

Recently, Eminem celebrated the 20th anniversary of his seminal 2000 album, The Marshall Mathers LP. Earlier this year, he released his 10th studio album, Music to Be Murdered By.