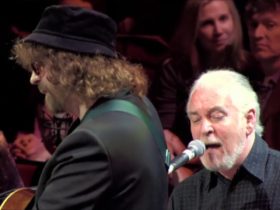 The American Rapper Eminem Speaking about his personal life in a new interview with Mike Tyson on Hotboxin’s podcast. He spoke with pride about his biological daughter Hailie Jade, and two adoptive daughters, Whitney and Alaina.

“It definitely is crazy,” said Eminem of his daughters.

“I have a niece that I have helped raise too that’s pretty much like a daughter to me and she is 26. And I have a younger one that’s 17 now.

“So when I think about my accomplishments that’s probably the thing I’m the most proud of is that, is being able to raise kids.”

Eminem Says Raising His Children Is The Accomplishment ‘most proud of’

He also spoke proudly of the achievements of, 24, daughter Hailie Jade.

“No babies, she has a boyfriend,” the rapper told Tyson and his co-hosts. “She’s doing good. She’s made me proud for sure.”

Eminem(Real Name Marshall Bruce Mathers III) is an American rapper, songwriter, record producer, and record executive. He is one of the most successful artists of the 21st century. In addition to his solo career, Eminem was a member of the hip hop group D12.