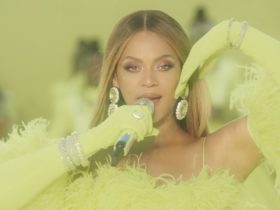 The track, ‘Pineapple’ is the first track the duo collaborated on, which then sparked a series of demos that was recorded over the span of 2 years. In their own words, this beat-thumping record is described as “Literally a song about pineapple juice”.

Alongside their follow-up release, the duo drops their first-ever line of NFTs which offers fans the opportunity to own the rights of Good Luck Chuck’s next release. This collection is now publicly available on OpenSea.io.

“The ‘Lucky’ Collection consists of ten unique 1/1 digital assets created by us and owning any one of them would mean owning a share of what will next be in our discography,” says Good Luck Chuck, as they look towards expanding the project outside of music and into other art forms as they further cement their position into their ambitious artistry.

Do you know Who is Chuck? That’s the question that has been popping up ever since the off-centre debut of Good Luck Chuck this year, which saw iconic outlets like Esquire, Nylon, Earmilk and Mixmag all lauding founding partners, Perk Pietrek (DJ & Music Producer) and Direwulf (Multi-Instrumentalist) for the ingenious creation of Good Luck Chuck and the release of ‘Ups & Down’ EP.