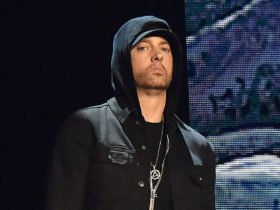 American singer and songwriter, Halsey has announced that she will debut the “If I Can’t Have Love, I Want Power” IMAX film to theatres on Aug. 3. Check out the trailer below.

She is taking her first dive into film with the IMAX presentation. Collaborating with director Colin Tilley, who she previously worked with on videos for “Without Me” and “You Should Be Sad,” Halsey wrote the film.

“This film is about the lifelong social labyrinth of sexuality and birth,” the trailer says in the opening. “The greatest horror stories never told were buried with the bodies of those who died in that labyrinth.”

She shared the album artwork & release date via Instagram and wrote that “This album is a concept album about the joys and horrors of pregnancy and childbirth. It was very important to me that the cover art conveyed the sentiment of my journey over the past few months.

She added, “The dichotomy of the Madonna and the Whore. The idea that I am a sexual being and my body as a vessel and gift to my child are two concepts that can co-exist peacefully and powerfully. My body has belonged to the world in many different ways the past few years, and this image is my means of reclaiming my autonomy and establishing my pride and strength as a life force for my human being.”

Experience “If I Can’t Have Love, I Want Power”
the hour-long film event in @IMAX.