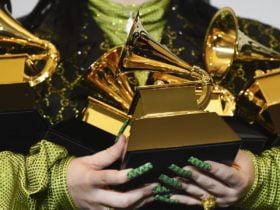 After teasing the “Golden” video on Friday (Oct. 23), the actual music video for the Fine Line track was released on Monday (Oct. 26). Yesterday, Harry shared the photo of the star shirtless, wearing flowy floral pants and a yellow bucket hat, standing on rocks with a sea behind him.

The track, “Golden” is the fifth release taken from Styles’ 2019 album, following “Lights Up,” “Adore You,” “Falling” and “Watermelon Sugar.”

Coming to the music video, it begins with a cave, where Harry is running in the cave while singing the song, then he drives a car on the mountains, after that, he goes to the street and dance like a cool dude, most of the time we can see him running away. To know more about the track, watch the full video here.