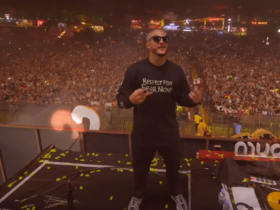 The band said, “It is with very heavy hearts and tear-filled eyes that we share the news that our beloved friend and bandmate, Bryan St. Pere, has passed away. We are devastated and deeply saddened by his sudden, and unexpected passing.

“Bryan was a dear friend, a loving father, brother, and was an incredible person and musician. We all feel extremely lucky to have shared time and space with him. Peace and love to all who knew Bryan, and those he touched. We will miss him dearly.” They added.

St. Pere joined Hum in 1990, a year after the band first formed. He reportedly was invited to join the lineup after the rest of the band heard him performing the drum parts of Rush songs as they passed by his window.

He performed on all five of the band’s albums, including their most well-known track ‘Stars’ from 1995’s ‘You’d Prefer An Astronaut’.