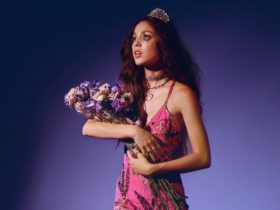 IAMDDB said about the song, “For all the hearts filled with love. Fear only rules your heart if you allow it and right now is a time to embrace love instead of running from it,”. The new song is from her debut album set for release in 2021, is a sultry slow-jam carried by trap beats that celebrate giving in to love.

IAMDDB shared a cover art of his new song on Instagram with the caption, “out. go stream. big luhv to @adrian3_0 on prod. #quarantine2020 ???”

In an interview with NME earlier last year about her debut album, which was initially scheduled for this year, IAMDDB stated: “The album’s next but I’m dropping that in 2020. I’ve got some interesting collaborations and I’m really staying focused on making the best quality disc I can at the moment.”

IAMDBB said about mixtape: “It really don’t you know. I feel like I’ve already put out five albums as it is. It’s the same fucking thing! I guess this time it’s been a bit more organized and structured, a bit more of a solid idea behind it.”

IAMDDB(Real Name Diana De Brito) is a British rapper and singer based in Manchester, United Kingdom. IAMDDB has released three albums as of 2019 and was listed number three on BBC Sound of 2018