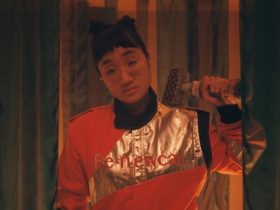 The music artists, J Balvin, Dua Lipa, and Bad Bunny have teamed up for the new song called “Un Día (One Day),” – Watch the full video below.

The track is produced by Tainy and executive produced by NEON16 and directed by Colombian creative Stillz. According to a press release, the bilingual track is about nostalgia. The clip focuses on a young woman going through life alone, seemingly processing the breakup that Lipa sings about on the track.

Balvin, Lipa and Tainy teased the release date on Twitter on Wednesday (July 22). The track is Lipa’s first new material since the release of her second album, ‘Future Nostalgia’, in March, with Lipa releasing a video for the album track ‘Hallucinate’ earlier this month.

‘Un Día (One Day)’ is the second track of Colombian singer, J Balvin comes after his album ‘Colores’, which was released in March. Meanwhile, Bad Bunny has dropped two surprise albums this year, beginning with ‘YHLQMDLG’ in February, which came out only two days after the artist announced its upcoming release.

Earlier this week the singer came under fire after tweeting about the rights of indigenous Kosovar Albanians, sparking a heated debate online.