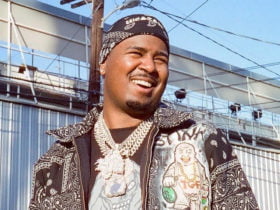 Drakeo The Ruler Drops New Project “Ain’t That The Truth”

Canadian-Dutch-Korean singer, Jeon So-mi has shared a teaser image of her upcoming new single. Which will be released on July 22 at 6 p.m. KST. Check out the image below.

She shared a teaser poster for her upcoming single on Instagram on Tuesday with the caption, “S Coming Back 2020. 7 . 22 Somi being Ennik.”

Before the song’s release, Somi is set to begin shooting an upcoming broadcast of MBC’s South Korean talk show ‘Radio Star’. Filming will take place on Wednesday, July 15, with the episode airing at a later date. Somi’s comeback single is scheduled to be out on Wednesday, July 22, at 6 pm KST which is 5 am EST.

Somi first debuted in the music industry as part of the South Korean girl group I.O.I. which disbanded in 2017. With several collaborative musical engagements in the following years, it wasn’t until February last year that Somi would become a solo artist when she signed with The Black Label and released her debut single ‘Birthday’.

The song released in June 2019 along with an accompanying music video. She made her first music show appearance as a solo artist on MBC’s ‘Show! Music Core’ the same month, performing both ‘Birthday’ and its B-side ‘Outta My Head’.