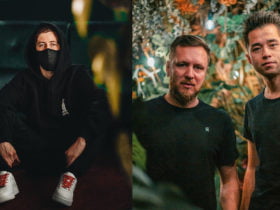 American singer-songwriter, Katy Perry has given birth to her first baby daughter with husband Orlando Bloom. Check out the first picture below.

United Nations agency, UNICEF confirmed the news via social media and shared the baby picture with the caption, “Welcome to the world, Daisy Dove Bloom! We are honored to introduce Goodwill Ambassadors @KatyPerry and Orlando Bloom’s new bundle of joy.” “We are floating with love and wonder from the safe and healthy arrival of our daughter.”

“But we know we’re the lucky ones and not everyone can have a birthing experience as peaceful as ours was.” The couple added, “Communities around the world are still experiencing a shortage of healthcare workers and every eleven seconds a pregnant woman or newborn dies, mostly from preventable causes.

“Since COVID-19, many more newborn lives are at risk because of a greater lack of access to water, soap, vaccines and medicines that prevent diseases. As parents to a newborn, this breaks our hearts, as we empathize with struggling parents now more than ever.”

Recently, Katy Perry released her brand new single named ‘What Makes A Woman‘ from her upcoming album ‘Smile.’ Meanwhile, the album, ‘Smile‘ will be released on Aug. 28(Tomorrow) via Capitol Records. Pre-save the full album by clicking here.

On 7th July, She released her new title track colorful music video ‘Smile‘ for his upcoming fifth album. The album Smile will be Perry’s first album since the release of ‘Witness’ in 2017. It also follows up on her promise that it would be out this year, despite the challenges presented by a coronavirus.