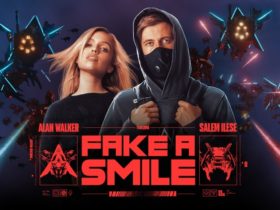 Alan Walker Team Up With Salem Ilese For New Song, ‘Fake A Smile’

A brand new trailer is directed by Takashi Murakami that includes the iconic Kanye bear used by the rapper in promotional supplies for his first three albums. The bear is voiced by Kanye, and one other character, “Kid Fox,” is voiced by Cudi, and sound design was handled by William J. Sullivan and Cudi.

Kid Cudi has simply revealed a teaser for an upcoming animated TV series (at least we think it’s a series and not a one-off episode, however, we do not yet have confirmation) centered around his joint project with Kanye, Kids See Ghosts.

Kid Cudi excitedly announced the teaser on Twitter this morning, in his all-caps tweet below. He followed it up with some fan interaction about the series too. Check out the tweets below, and let us know if you’re excited!

Today, Kanye West has also shared a first look at his upcoming YEEZY x GAP collaboration. Kanye posted a snapshot on Twitter using #WESTDAYEVER hashtag, which indicates it will be built around classic everyday staples including hoodies, cargo pants, quilted jackets, and accessories in a range of bold colorways. The bag also listed the frequent location of current-era West projects, i.e. Wyoming.