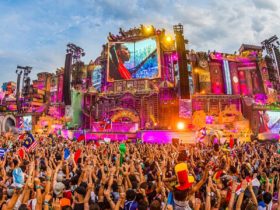 Tomorrowland Announces ‘AROUND THE WORLD’ The Digital Music Festival

The Rostrum Records has released a Deluxe Digital Version of Mac Miller’s “K.I.D.S. mixtape” to rejoice its 10th anniversary. Listen to the Deluxe Version below.

The songs, ‘Ayye’ and ‘Back In The Day’ has added in ‘K.I.D.S.’ although the label has not confirmed whether or not they had been initially meant to seem on the album. Listen to the deluxe version of K.I.D.S, which follows for Kickin’ Incredibly Dope Shit and references the 1995 movie Kids, below via Spotify.

Not long after Eric Dan, known professionally as E. Dan and owner of ID Labs studio where Miller produced much of his work, he shared a snippet of ‘Ayye’ on Instagram and wrote that, “I produced this one called ‘Ayye’,” Love and miss my brother every day and forever 💙✨✨✨✨”