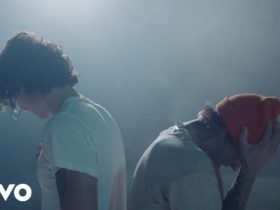 American singer and record producer, Miley Cyrus has announced that she will be releasing her new single named ‘MidNight Sky‘ this month. Check out the post below.

On 6th Aug, Miley Cyrus announced the news via social media and wrote that “I know it feels like you’ve been waiting forever and ever …. but no more….. She is finally here. My new single MIDNIGHT SKY. AUGUST 14th.”

Miley Cyrus To Releases Something Massive This Month

Miley also shared pictures of herself via social media in the studio with the pop singer Dua Lipa and Watt, while teasing her fans even more with the caption, “Dua has heard what you haven’t….”

On the other hand, Dua Lipa also shared a picture with Miley and Watt on her Instagram and wrote that, “bromance…”

In July, it was announced that Cyrus – along with Coldplay, BTS, Usher and more – would perform as part of this year’s live-streamed iHeartRadio Festival on September 18-19.