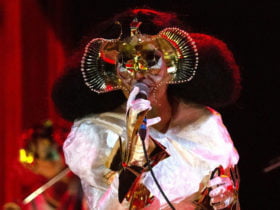 The track ‘C’est Comme Ca’ will mark the third single to appear on Paramore’s upcoming sixth album ‘This Is Why’, which will be released on February 10.

READ MORE – Moneybagg Yo Team Up With GloRilla For New Hip-Hop Track, ‘On Wat U On’

The new song’s title translates to “It’s Like That.” In a statement, Paramore singer Hayley Williams explained, “I’m trying to get un-addicted to a survival narrative. The idea of imminent doom is less catastrophic to me than not knowing anything about the future or my part in it. The guys and I are all in much more stable places in our lives than ever before. And somehow that is harder for me to adjust to.”

“In a single year, I’ve aged one hundred/ My social life – a chiropractic appointment/ Sit still long enough to listen to yourself/ Or maybe just long enough for you to atrophy for hell,” the vocals come up.