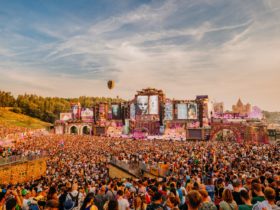 Phoebe Bridgers was just 22 when she made “Stranger in the Alps,” her acclaimed 2017 debut. Since then, she has been involved in collaborations with Conor Oberst and others. She also became the producer of her albums, including her latest titled “Punisher.”

Recently, she performed a “Tiny Desk (Home) Concert” for NPR, in front of a green screen of the Oval Office. For her ‘Tiny Desk‘ performance she started with “Kyoto,” a story song based on her first trip to Japan, followed by a sweet version of “Moon Song” and then, the band kicks into her surreal doomsday tune “I Know the End.”