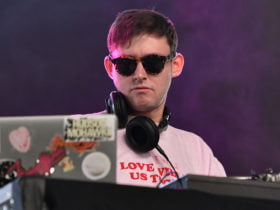 Indian Rapper Raftaar is famous for his rapping skills but many people already know that he also produces music (Hip-Hop Beats). This time he gives the music for Karma’s latest track ‘BABA YAGA’. Baba Yaga is Written & performed by KARMA and Music is composed by RAFTAAR.

The official video titled ‘KARMA x RAFTAAR on the beat – BABA YAGA | KALAMKAAR’ is released on Raftaar’s own record label ‘Kalamkaar‘ and so far the video of this track is watched by above 1.2 million users.

And, now notice the horns in the beat of Baba Yaga which feels quite similar but we are not saying this is copied. The correct word is may be inspired because music is all about the inspiration, every artists take the inspiration from others creative works.

We don’t know that Raftaar had watched the Dark Tv series or not. But besides this thing, this beat is a pure gem, and a topping of Karma’s rap is so delicious. This is something new in desi hip hop and we want more like this.

Recently Raftaar is signed under Sony Music Label and also his own label Kalamkaar has now become a partner with Sony Music Label. Now a lot of new tracks are lined up by Kalamkaar and Raftaar’s EP which is Baarish is also coming soon. So stay tuned guys when the new music is released you get the updates through our website.