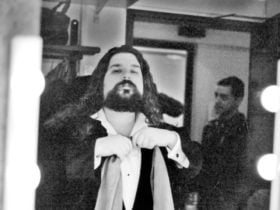 Hal Willner was famend as a multi-talented producer of numerous albums by Lou Reed, Marianne Faithfull, Lucinda Williams as well as elaborate multi-artist tribute compilations to Charles Mingus, Kurt Weil and others.

“We’re going to miss you so damn much,” Adam Sandler said. “You were just a great man. A great person and we appreciated everything you did for us.”

SNL host John Mulaney added that he was “a wonderful friend to me and everyone at Saturday Night Live. I don’t know why someone who was friends with Miles Davis would me include me in his life, but he did.”

“We appreciate everything you did for us, Hal,” Pete Davidson says. “We’re gonna miss you so much.”

“The live thing is what’s really exciting to me it’s an amazing gig. When it’s all working, there’s nothing like it. I kinda get off on the danger, because it can really f— up, or ‘This is gonna be so magical.’”

Hal Willner was an American music producer working in recording, films, TV and live events. He was best known for assembling tribute albums and events featuring a wide variety of artists and musical styles.