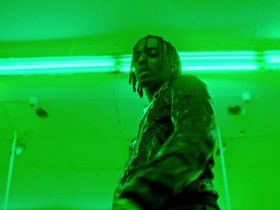 British rapper, Slowthai has dropped his new song named “Selfish,” and also, announce his new album ‘Ugly.’ Listen to the full song below.

The new song “Selfish,” will appear on his upcoming album named “UGLY,” which will be released on March 3 (via Method/Interscope).

The album’s title—now tattooed beneath Slowthai’s eye—is meant to be an acronym for “U Gotta Love Yourself.” In a statement, the musician said: “I have UGLY tattooed on my face because it’s a reminder to love myself, rather than put myself down constantly or feel the impression people have of me should determine who I am as a person.”

Slowthai said in a statement:

The first album was the sound of where I’m from and everything I thought I knew. The second album is what was relevant to me at that moment in time, the present. And this album is completely me—about how I feel and what I want to be…. It’s everything I’ve been leading up to.

This album was me trying to emulate the spirit of the brotherhood ethos that bands have. Music is about the feeling and emotion that goes into it. Like an artist making a painting, it’s the expression of that moment in time. I really felt like I didn’t want to rap, whereas before, rap was the only way I could express myself with the tools I had. Now that I have more freedom to create and do more, why wouldn’t we change it up?

Check out the Ugly Tracklist: