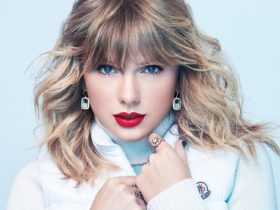 American singer, Taylor Swift has dropped her new “Folklore: the long pond studio sessions” documentary on Disney+, also she shared a video of her performing ‘Exile‘ with Bon Iver’s Justin Vernon. Watch the full video below.

Also, Swift is performing “exile” featuring Bon Iver from the Grammy nominated Album of the Year, folklore. From the original film, folklore: the long pond studio sessions on Disney+. Watch the video here.

She sings, “I can see you staring, honey / Like he’s just your understudy / Like you’d get your knuckles bloody for me / Second, third, and hundredth chances / Balancing on breaking branches / Those eyes add insult to injury.”

Get the full album by clicking here:

Last month, the album, ‘Folklore’ became the first million-selling album of 2020. It returned to the top of the Billboard chart at the end of October, selling 57,000 copies and taking its total number sold to 1.038million. In the mean time, She also performed her song ‘Betty‘ on ACM Awards 2020 for the first time in seven years.

She had released her latest album ‘Folklore,’ and she also dropped the music video for the album track “Cardigan,” on 24th July, The album ‘Folklore‘ is Taylor Swift’s eighth album and a follow-up to last year’s Lover.